I am a geneticist, passionate about bacteria and their evolutionary mechanisms. I lead a team working on horizontal gene transfer, recombination, the SOS response and genome architecture.

I did my PhD in Genetics, on the genes encoding the light harvesting complexes of cyanobacteria – the phycobilisomes- and their regulation by the light composition as well as by sulfur availability in waters. I then worked on the formylation/ deformylation steps of the translation initiation process in bacteria. I identified the deformylase gene and showed that this essential activity, exclusively found in bacteria, was an ideal target for the development of new antibiotics. After that, I went to UBC, as visiting prof. with Julian Davies, where I started to work on integrons and their origin. At that time, in 1995, they were only described as the primary source of resistance toward multiple antibiotics among Gram-negative pathogens. With Julian, we identified the first chromosomal integron in Vibrio cholerae, where this platform plays a broader role for adaptation.  Back in Paris, I pursued this exciting project and first concentrated my efforts on understanding the basics of the integron’s genetic unique properties, in particular on the molecular mechanisms and the dynamics of gene capture in integrons, in the context of the antibiotic resistance development. In recent years, we have expanded our studies to two new topics: – how subinhibitory concentrations of antibiotics trigger specific stress responses and genetic diversification; – the understanding of the two chromosomes architecture of Vibrio species genomes, and the selective advantages it conveys, using V. cholerae, the agent of cholera, as paradigm.

Antibiotics are highly efficient drugs to kill pathogenic bacteria with low side effects. For more than 70 years, the massive use of these miracle drugs has saved millions of human and animal lives. Unfortunately […] 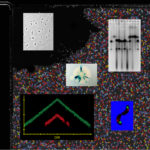 The RepliChroms project aims at decrypting plasmid adaptation mechanisms in their bacterial host. Bacterial genomes are composed of two types of replicons: chromosomes and plasmids. Bacteria commonly have a unique circular chromosome, and current […]

Induction of stress responses and mutagenesis by low doses of antibiotics

The vast majority of the studies evaluate effects of the above-minimal inhibitory concentration (above-MIC) of antibiotics on bacteria. However, bacteria frequently encounter low concentrations of antibiotics in their environments. Our goal is to elucidate […] 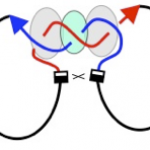 Bacterial genomes are mainly composed of two types of replicons: chromosomes and plasmids. Plasmids are accessory mobile genetic elements acquired by horizontal transfer between strains or species. Their domestication by new hosts is of […]

Plasticity of the Vibrio species genomes

This third project is to investigate other factors involved in genome plasticity of the complex genome of Vibrio species. The Vibrio group includes a large number of pathogenic species whose hosts range from human […]

We are studying different aspects of this gene capture system: their distribution, their contribution to the adaptive capacity of their host and their recombination processes. This natural genetic system is composed of two basic […]

Extension of the evolutionary potential of any gene

Evolutionary processes largely rely on the production of diversity. Genetic robustness, by allowing the accumulation of neutral diversity within a population, has been associated with increase in evolutionary potential (evolvability). We have already shown […]