e.g. searching for members in projects tagged cancer
Search for
Count
IN
OUT
Content 1
Content 2
Search
Go back
Scroll to top
Share
Plasticity of the Vibrio species genomes
Extension of the evolutionary potential of any gene
© Melanie Blokesch, EPFL
Flagellated Vibrio cholerae
Project

We are studying different aspects of this gene capture system: their distribution, their contribution to the adaptive capacity of their host and their recombination processes. This natural genetic system is composed of two basic elements: a gene coding an integrase of the site-specific tyrosine recombinase family and a primary recombination site, attI. The integrase activity allows the insertion of open reading frames, in the form of a circular cassette, at the recombination site. All these cassettes are composed of a single gene associated to a recombination site, the attC site, indispensable for the integrase recognition and recombination with attI. We have shown that the resistance integrons derived from sedentary super-integrons carried by environmental species, such as the different Vibrio. Recently, the structural characteristics of the attC sites led us to propose a new model for the recombination in integrons, which only involved the attC bottom strand folded in a stem-and loop, based on its symmetrical structure, and a canonical double-strand (ds) attI site. Recognition and recombination by the IntI integrase of such a structure with a canonical ds-attI site would lead to a Holliday junction (HJ) intermediate which may be resolved by a replication step. 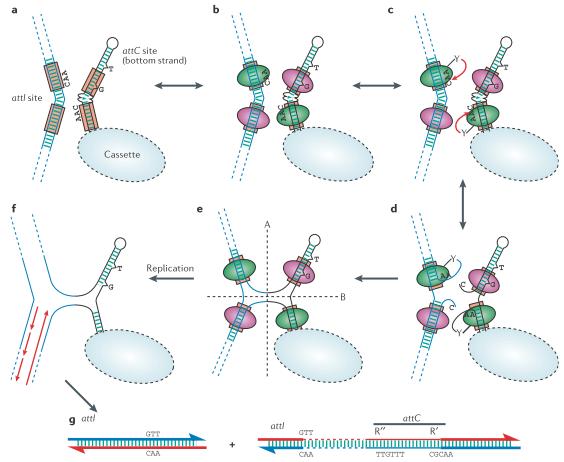 We have sustained this model with in vivo experiments, but also through the resolution of the 3D structure of integron integrase tetramer bound to single stranded substrates (collaboration with D. Gopaul). 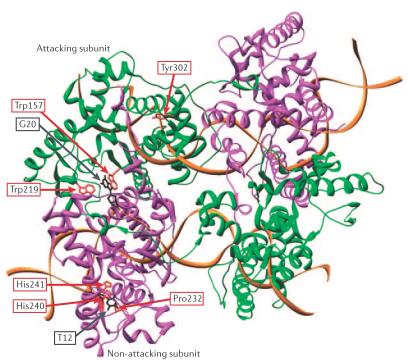 We are currently studying the pathways allowing the formation of the attC secondary structure in vivo and the resolution of the unconventional Holliday junction.

We also showed that in most integrons, be they chromosomal or mobile, the integrase expression was controlled by the SOS response regulator LexA. This control allow to subdue the cassette capture and array reorganization to the episodes of stress met by bacteria during their life, such as the antibiotics treatments. We also showed that horizontal gene transfer carried on by both conjugation and natural transformation were potent inducers of the SOS response, and that they also triggered the integrase expression and cassette recombination.