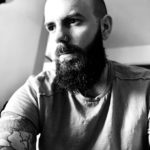 Entamoeba histolytica, the agent of amoebiasis, colonizes the human colon and can invade the lining of the colon to disseminate in the deep layers of the intestine. Amoebiasis mainly affects poor people in developing countries, where the barriers between human feces and food or water are inadequate. Humans are the only reservoir of E. histolytica and are the sole target organism of the development of the disease, which limits our knowledge of the crosstalk between the colon and the parasite, especially during the acute phase of infection. In the present work, we constructed an in vitro model of intestinal epithelium that includes an immune component to mimic the immune response against pathogenic microorganisms such as E. histolytica. Using this model and leading-edge technologies, including tissue and cell imaging, transcriptomics, proteomics and ELISA, we investigated the early stages of amoebic infection, in particular, the early immune response. The data obtained highlight the importance of several previously showed virulence markers in patients and experimental models. In addition, we underscored the involvement of other factors that appear to be key regulators of gene expression in the cellular stress responses against amoebiasis and we found novel regulatory mechanisms used by this parasite to modulate the immune response and survive within the human intestine.

This project is a part of the international Infect-Era program, AMOEBAC: Entamoeba histolytica-bacterium interaction and the role of this interaction in intestinal pathogenesis (http://www.infect-era.eu/2nd-call-2014) The aim of this investigation is to understand the induced […]