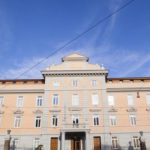 The Negativicutes are a poorly studied lineage of bacteria that include common inhabitants of the human oral and gut microbiome such as the anaerobe Veillonella, and which can also develop into opportunistic pathogens. Despite belonging phylogenetically to the Firmicutes (low G+C Gram positives), they surprisingly harbour outer membranes (OM) with lipopolysaccharide (LPS), which are characteristics typical of Gram-negative bacteria, making them an evolutionary conundrum and also promising new models to study the diversity and function of bacterial cell envelopes. However, very few and scattered information is available on the nature and origin of the OM in these atypical diderm Firmicutes and on their role in community behaviour in the gut environment, as well as their interaction with the immune system. With this project we wish to address these questions by carrying out a highly interdisciplinary study merging bioinformatics and evolutionary analyses with experimental work.

We will proceed through three complementary work packages. The available complete genomes of Negativicutes will be screened through a bioinformatics pipeline to detect all potential OM components. This analysis will be complemented by a comparative proteomic analysis of the major components of the cell surface of strains representing the diversity of Negativicutes. The resulting list of candidates will be subjected to functional annotation and evolutionary analysis to establish a clearer picture of the nature of the OM of Negativicutes and understand how it originated. In parallel, we will develop genetic tools to manipulate the Veillonella genomes and identify the molecular factors, including cell surface components, which are involved in the sessile life of Veillonella as well as its interaction with other relevant members of the gut microbiota community such as Escherichia coli and Bacteroides thetaiotaomicron. We will also assess whether life in biofilm affects OM composition and structure, including LPS, which is essential for the interaction of Veillonella with host components and notably the immune system. Moreover, we will investigate the inflammatory potential of Veillonella, with special focus on the immune impact of its LPS, which will be purified and structurally characterized. We will clarify if the LPS of Veillonella is modified when grown in the planktonic or the biofilm state and if this has an impact on the immune system.

Given its originality and multidisciplinary approach, this exploratory project will pioneer a novel research line on an understudied branch of the bacterial tree harbouring unique characteristics and with obvious relevance for both evolutionary and biomedical research.