Role of the major determinant of polar flagellation FlhG in the endoflagella-containing spirochete Leptospira. 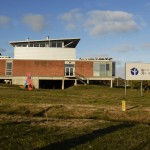 Spirochetes can be distinguished from other bacteria by their spiral-shaped morphology and subpolar periplasmic flagella. This study focused on FlhF and FlhG, which control the spatial and numerical regulation of flagella in many exoflagellated bacteria, in the spirochete Leptospira. In contrast to flhF which seems to be essential in Leptospira, we demonstrated that flhG- mutants in both the saprophyte L. biflexa and the pathogen L. interrogans were less motile than the wild-type strains in gel-like environments but not hyperflagellated as reported previously in other bacteria. Cryo-electron tomography revealed that the distance between the flagellar basal body and the tip of the cell decreased significantly in the flhG- mutant in comparison to wild-type and complemented strains. Additionally, comparative transcriptome analyses of L. biflexa flhG- and wild-type strains showed that FlhG acts as a negative regulator of transcription of some flagellar genes. We found that the L. interrogans flhG- mutant was attenuated for virulence in the hamster model. Cross-species complementation also showed that flhG is not interchangeable between species. Our results indicate that FlhF and FlhG in Leptospira contribute to governing cell motility but our data support the hypothesis that FlhF and FlhG function differently in each bacterial species, including among spirochetes.