The main research theme of the unit is to study the virulence of the rabies virus and seek to establish its molecular bases. The rabies virus replicates only in the nervous system (NS) and travels from the site of entry: a wound inflicted by a rabid animal, which inoculates the contaminated saliva into muscle and the nerve endings, up to the salivary glands. During its long journey in the NS, traveling from one neuron to the next order neuron rabies virus- infected neurons remain intact and immune responses have not effect on rabies virus progression. It is clear that this virus has developed sophisticated strategies to multiply in the NS and come out effectively.

We have  discovered that rabies virus has evolved robust mechanisms i) to upregulate the immune-subversive molecule PD-L1 at the surface of the infected neurons, allowing the destruction of protective T lymphocytes through a PD-1/PDL-1 mechanism,  and  ii) to activate survival signaling pathways leading to the protection of  infected neurons against premature apoptosis. We determined that the C-terminus of rabies virus G-protein encodes a PDZ-Binding motif (PBM) which interacts with one cellular kinase, MAST2, through the formation of a PDZ-PBM complex.  This interaction is sufficient to launch a cascade of signaling pathway triggering not only neurosurvival mechanisms but also PD-L1 upregulation. We have shown that a peptide called Neurovita whose sequence includes the G-protein PBM reproduces the neuroprotective property of the G-protein. We showed that Neurovita delivered by viral vectors (lentivector or AAV2) promotes neuritogenesis, neuroprotection against toxic insult but also neurite regeneration after a cut.  The neuroprotective and neuro-regenerative properties of Neurovita were demonstrated in several models of neurons injury including spinal cord injury in rat and degeneration of retina in mice.

From a therapeutic development perspective, we have designed and developed a method for delivering Neurovita into neurons in the form of protein. This construction called CPM-Neurovita was obtained by grafting Neurovita to an innovative Cell Penetrating Peptide (CPM).

A biotech company, Neurophoenix https://www.neurophoenix.fr/, has been created with the support of Institut Pasteur in order to promote the therapeutical potential of Neurovita in neurodegenerative diseases.

On the sidelines of our work on neuroprotection, we developed an in cellulo model of brain vasculature unit (BBB-Minibrain). This 3 D culture model  consists of a in cellulo model of BBB formed by endothelial cell (hCMEC/D3)-coated Transwells® porous filters inserted in the wells of a cell culture plate, containing a mixed culture of human brain cells (neurons, astrocytes and microglia) called Minibrain (see scheme below) mimicking a simplified cerebral parenchymal environment.

This BBB-Minibrain model gave us the opportunity to collaborate with an industrial partner to investigate the neurovirulence of Yellow Fever vaccines by following a 3R approach (Replace, Reduce and Refine animal use in the experiments). 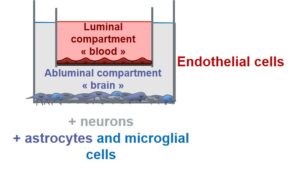 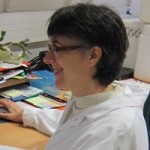 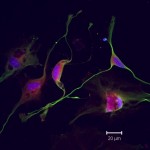 The virulence of a microbe is related to its capacity to invade host tissues and successfully promote its own multiplication and dissemination. Rabies virus, a neurotropic virus that causes fatal encephalitis in mammals, has […]