Segmentation and tracking of migrating cells in videomicroscopy with parametric active contours: a tool for cell-based drug testing 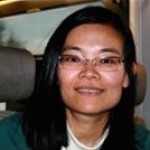 This paper presents a segmentation and tracking method for quantitative analysis of cell dynamics from in vitro videomicroscopy data. The method is based on parametric active contours and includes several adaptations that address important difficulties of cellular imaging, particularly the presence of low-contrast boundary deformations known as pseudopods, and the occurence of multiple contacts between cells. First, we use an edge map based on the average intensity dispersion that takes advantage of relative background homogeneity to facilitate the detection of both pseudopods and interfaces between adjacent cells. Second, we introduce a repulsive interaction between contours that allows correct segmentation of objects in contact and overcomes the shortcomings of previously reported techniques to enforce contour separation. Our tracking technique was validated on a realistic data set by comparison with a manually defined ground-truth and was successfully applied to study the motility of amoebae in a biological research project.