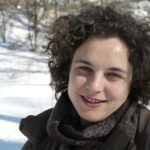 The GTPase RhoA is a major regulator of the assembly of actin stress fibers and the contractility of the actomyosin cytoskeleton. The epidermal cell differentiation inhibitor (EDIN) and EDIN-like ADP-ribosyltransferases of Staphylococcus aureus catalyze the inactivation of RhoA, producing actin cable disruption. We report that purified recombinant EDIN and EDIN-producing S. aureus provoke large transcellular tunnels in endothelial cells that we have named macroapertures (MAs). These structures open transiently, followed by the appearance of actin-containing membrane waves extending over the aperture. Disruption of actin cables, either directly or indirectly, through rhoA RNAi knockdown also triggers the formation of MAs. Intoxication of endothelial monolayers by EDIN produces a loss of barrier function and provides direct access of the endothelium basement membrane to S. aureus. 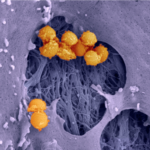