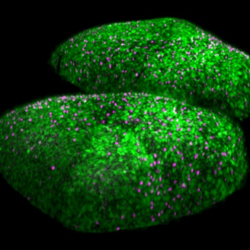 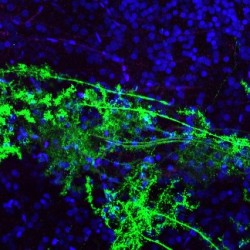 Vertebrate adult neural stem cells (NSCs) are generally quiescent, and the frequency of their cell cycle re-entry (“activation”) conditions their lifespan. Little is known of the molecular pathways controlling the NSC quiescence/activation balance. We […]

Laure Bally-Cuif studied at the Ecole Normale Supérieure in Paris. Interested in the development of the nervous system, she conducted her PhD at Hospital Salpêtrière (C. Sotelo’s laboratory) and Ecole Normale Supérieure (A. Prochiantz’s laboratory) under the supervision of Dr. Marion Wassef. Her PhD work addressed the mechanisms involved in the formation of organizing centers within the neural tube of avian and mammalian embryos. She was an EMBO post-doctoral fellow with Dr. Robert Ho at Princeton University, USA, where she was trained to the model system zebrafish to combine genetics and embryology. She has been using this system ever since. She was recruited at the CNRS in 1996. Following a second post-doctorate at the Helmholtz Research Center in Munich, she built her own research group in this institution in 2000, focusing on the molecular and cellular mechanisms involved in specifying and maintaining neural progenitors (« neural stem cells ») in the zebrafish embryonic and adult brain. She was awarded the Heinz-Maier Leibnitz Prize of the Deutsche Forschungsgemeinschaft for this work in 2006. In 2009, she joined the Paris-Saclay Institute for Neuroscience in Gif-sur-Yvette (France) on a CNRS Research Director position, where she established her research group with special funds from the ANR and Ecole des Neurosciences de Paris (Chairs of Excellence) and the Grand Prize of the Schlumberger Foundation for Education and Research. She was awarded an Advanced Grant of the ERC in 2013. She was appointed to her current Unit head position at Institut Pasteur in January 2016.