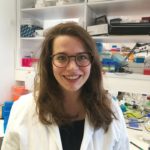 Although developmental mechanisms driving an increase in brain size during vertebrate evolution are actively studied, we know less about evolutionary strategies allowing accelerated brain growth. In zebrafish and other vertebrates studied to date, apical radial glia (RG) constitute the primary neurogenic progenitor population throughout life [1]; thus, RG activity is a determining factor of growth speed. Here, we ask whether enhanced RG activity is the mechanism selected to drive explosive growth, in adaptation to an ephemeral habitat. In post-hatching larvae of the turquoise killifish, which display drastic developmental acceleration, we show that the dorsal telencephalon (pallium) grows three times faster than in zebrafish. Rather than resulting from enhanced RG activity, we demonstrate that pallial growth is the product of a second type of progenitors (that we term NGPs for non-glial progenitors) that actively sustains neurogenesis and germinal zone self-renewal. Intriguingly, NGPs appear to retain, at larval stages, features of early embryonic progenitors. In parallel, RGs enter premature quiescence and express markers of astroglial function. Altogether, we propose that mosaic heterochrony within the neural progenitor population might permit rapid pallial growth by safeguarding both continued neurogenesis and astroglial function.