Iñaki Guijarro is a structural biologist interested in the interactions, structure, dynamics and inter-conversions of proteins (amyloid formation, protein folding and misfolding). His main expertise is in NMR, a technique that he has used coupled to other biophysical and biochemical techniques. Born in Mexico, he obtained his PhD from the Université Paris 7 in 1995 working on early folding intermediates in Muriel Delepierre’s team in close collaboration with Michel Goldberg (Institut Pasteur). His postdoctoral work at the University of Oxford in Prof. Chris Dobson lab was devoted to real-time folding kinetics by NMR and amyloid formation. His finding that a protein non-associated to a disease could form amyloids under appropriate conditions, ultimately led to the generic amyloid hypothesis envisioned and developed by Chris Dobson. He also contributed to the first low-resolution structure of an amyloid fibre by cryo-EM. He joined the Institut Pasteur in 1998 as a research scientist in the NMR of Biomolecules Unit headed by M. Delepierre working on protein structure, dynamics and interactions and on functional amyloids formed by fungal hydrophobins. He obtained his HDR in 2009. In 2018, he was appointed as head of the new Biological NMR facility of the Institut Pasteur comprising an 800 MHz, a 600 MHz, both equipped with a cryoprobe, a 500 MHz and HDX mass spectrometry activities.

Proteins from the hydrophobin family are produced by filamentous fungi in a soluble form, which spontaneously self-assemble at air/water or hydrophobic/hydrophilic interfaces to produce amphipathic layers and accomplish their biological role. Hydrophobin layers consist […]

Aspergillus fumigatus is an opportunistic pathogen than can cause a variety of diseases in immunocompromised individuals that range from allergies to severe pathologies such as invasive aspergillosis. This filamentous fungus has become the major […] 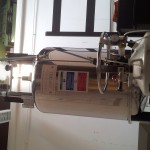