Acyl-CoAs are the major metabolic carriers of carbon in living organisms. The most conserved ways to their synthesis include the oxidative decarboxylation of α-ketoacids carried out by three distinct enzymatic machineries: the pyruvate dehydrogenase complex (PDH) that controls the entrance of carbon into the TCA cycle, the branched-chain α-ketoacid dehydrogenase complex (BCKDH) involved in the catabolism of hydrophobic amino acids, and the α-ketoglutarate dehydrogenase complex (KDH) situated at the crossroad between the TCA cycle and the nitrogen metabolism through the synthesis of glutamate and glutamine. These large, tripartite complexes share a common molecular architecture around a core usually made of either 24 or 60 subunits of the E2 component, which carries the dihydrolipoamide acyltransferase activity; the number of E2 subunits and the symmetry of the core depend on the complex and the species. The other two components are E1, which catalyzes the rate-limiting, thiamine diphosphate-dependent decarboxylation of the α-ketoacid , and E3, a flavoenzyme that reoxidizes the lipoyl arm from E2 generating reducing equivalents in terms of NADH.

Despite the KDH complex was originally reported as absent in M. tuberculosis (Tian et al., 2005), we showed that not only the KDH activity can be measured in total cell extracts under certain conditions (Wagner et al., 2011), but also that KDH might actually be merged to PDH, i.e. the pyruvate dehydrogenase complex. Since no KDH-specific E2o component (dihydrolipoamide succinyltransferase) is present in M. tuberculosis nor in the actinobacterial model Corynebacterium glutamicum, E2p from PDH is used as a lipoyl donor instead, suggesting the presence of a unique, hybrid ‘supercomplex’. It is also worth to note that acetyl-CoA, the product of PDH, is also an allosteric activator of E1o from the KDH complex (Wagner et al., 2011), further suggesting the presence of positive feedback mechanisms. Merging these two complexes might result into a molecular assembly of several MDa, with no analogies to other aerobic organisms (figure below). 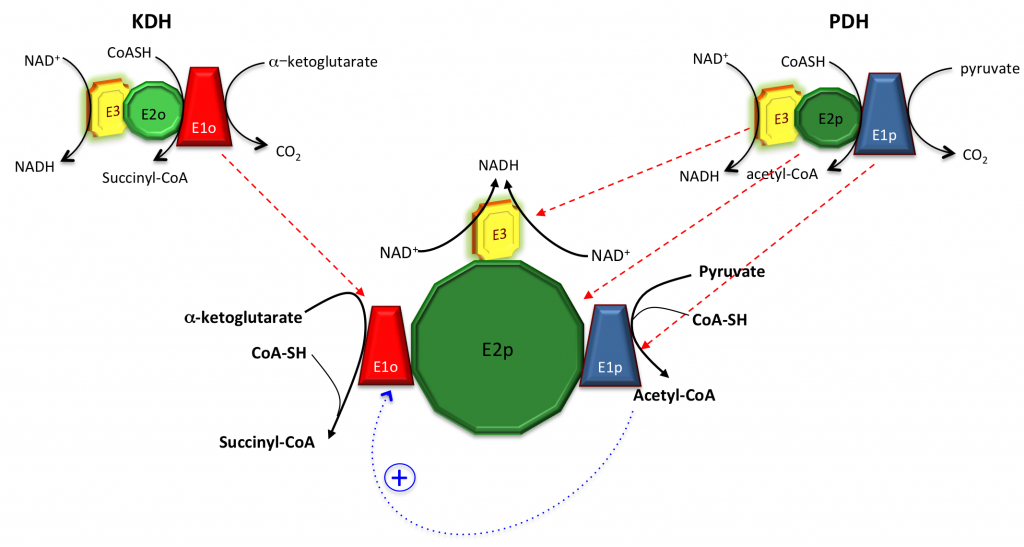 We are thus following two complementary, parallel approaches: one usually referred to as ‘top-down’, i.e. to isolate the complex from C. glutamicum total cell extracts, and the second, in contrast, known as ‘bottom-up’ as we try to produce all the supercomplex components as recombinant proteins in E. coli to first study their interactions, in collaboration with the Citech teams (notably the Biophysics, the Mass Spectrometry and the Crystallography Platforms). Our objective is to reconstitute the complex and to get a structural (but not static) picture of it by a combination of integrative structural biology approaches.