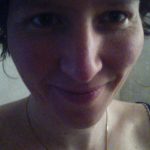 Mutations in PDZ Binding Motif (PBM)-containing proteins are also associated to the Usher syndrome, a genetic disease resulting in both hearing loss and visual impairment. Most Usher proteins are present in auditory hair cells and have the capacity to interact with each other through PDZ domains and PBM. We aim at characterizing the organization of submembrane complexes involved in the mechano-electrical transduction machinery and in the inter-stereocilia links (PTR 483 2014-2016; ITN H2020 2016-2019). We are deciphering the functional and structural role of the PDZ containing protein Whirlin, a key Usher protein. This large protein of about 1000 residues is composed 6 protein-protein interaction domains. We have recently produced and characterized several mono- and multi-domain constructs of Whirlin. Combining NMR, SAXS and SPR experiments, we have shown that some domains of Whirlin are associated as supramodules modulating the affinity and specificity for PDZ ligands, proteins and lipids. 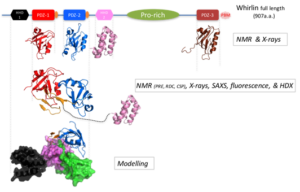