Our research concerns the field of HIV pathogenesis, with an emphasis on the mechanisms that perturb CD4+ T cell responses and lead to the development of AIDS. The team currently focuses on the study of rare patients who spontaneously control of HIV replication in the absence of antiretroviral therapy. Such patients, called HIV Controllers or Elite Controllers, show signs of a particularly efficient antiviral immune response that contains HIV replication to very low levels. We have launched an in-depth characterization of HIV-specific CD4+ T cells in Controllers, to understand how such cells could escape depletion and maintain efficient helper function.

We obtained evidence for the persistence of highly differentiated Th1 effectors CD4+ T cells, in Controllers, while such cells were lost in patients treated in the long-term. The presence of Th1 effectors in Controlers was unexpected considering the very low levels of viral antigens available to stimulate effector responses. MHC class II tetramer binding analyses revealed that Controller CD4+ T cells expressed T cell receptors (TCRs) with a high avidity for immunodominant HIV Gag peptides, while such cells were absent from treated patients. Thus, HIV controllers harbored a pool of memory CD4+ T cells with the intrinsic ability to detect minimal amounts of viral antigens, and to receive sufficient signal to undergo effector differentiation. These high avidity CD4+ T cells may maintain the immune system of HIV Controllers in constant alert, and allow the triggering of a very rapid antiviral response in case of a rebound in viral replication.

To analyze the molecular determinants of this sensitive antiviral response, we have analyzed the repertoire of TCRs expressed by CD4+ T cells specific for the most immunodominant epitope in HIV Gag. We obtained evidence that particular TCRs are associated with HIV control. These shared (or “public”) TCRs are preferentially expressed by Controller CD4+ T cells and show remarkably high affinity for the Gag peptide/MHC II complex. When transferred into healthy donor cells with lentivectors, these public TCRs confer a series of properties characteristic of Controller CD4+ T cell responses, including high antigen sensitivity and polyfunctionality. These findings suggest it may be beneficial to induce the amplification of such TCRs in vaccination and immunotherapeutic approaches directed at containing HIV infection. 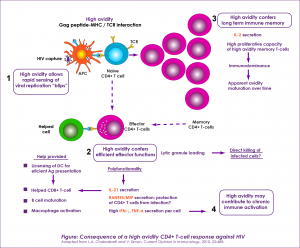 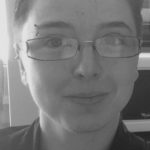 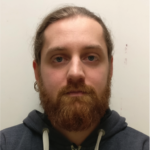 We obtained recent evidence that CD4+ T cells of HIV Controllers preferentially express a particular set of shared T cell receptors (TCRs) directed to the HIV capsid. We will  monitor the dynamics of these […]

Characterization of the TCR signature induced by candidate HIV vaccines

The project aims at determining whether candidate HIV DNA vaccines can induce the type of high sensitivity CD4+ T cell responses characteristic of naturally controlled HIV infection. The main objective will be to devise […]

The CD4+ Tfh subset is dedicated to helping B cell and is essential to the maturation of high affinity antibodies. We are investigating whether the high avidity TCRs characteristic of HIV Controller CD4+ T […]