Clostridium difficile, a Gram positive, anaerobic, spore-forming bacterium is an emergent pathogen and the most common cause of nosocomial diarrhea. Although transmission of C. difficile is mediated by contamination of the gut by spores, the regulatory cascade controlling spore formation remains poorly characterized. During Bacillus subtilis sporulation, a cascade of four sigma factors, σ(F) and σ(G) in the forespore and σ(E) and σ(K) in the mother cell governs compartment-specific gene expression. In this work, we combined genome wide transcriptional analyses and promoter mapping to define the C. difficile σ(F), σ(E), σ(G) and σ(K) regulons. We identified about 225 genes under the control of these sigma factors: 25 in the σ(F) regulon, 97 σ(E)-dependent genes, 50 σ(G)-governed genes and 56 genes under σ(K) control. A significant fraction of genes in each regulon is of unknown function but new candidates for spore coat proteins could be proposed as being synthesized under σ(E) or σ(K) control and detected in a previously published spore proteome. SpoIIID of C. difficile also plays a pivotal role in the mother cell line of expression repressing the transcription of many members of the σ(E) regulon and activating sigK expression. Global analysis of developmental gene expression under the control of these sigma factors revealed deviations from the B. subtilis model regarding the communication between mother cell and forespore in C. difficile. We showed that the expression of the σ(E) regulon in the mother cell was not strictly under the control of σ(F) despite the fact that the forespore product SpoIIR was required for the processing of pro-σ(E). In addition, the σ(K) regulon was not controlled by σ(G) in C. difficile in agreement with the lack of pro-σ(K) processing. This work is one key step to obtain new insights about the diversity and evolution of the sporulation process among Firmicutes. 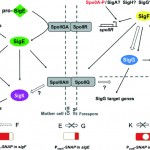 The regulatory network of sporulation and spore morphogenesis in Clostridium difficile

Clostridium difficile, a Gram-positive, anaerobic, spore-forming bacterium, is a major cause of nosocomial infections such as antibiotic-associated diarrhea. Spores are the vector of its transmission and persistence in the environment. Despite the importance of […]