We have shown that proteins from Rabies virus during infection disrupts the interactions of the kinase MAST2 and phosphatase PTPN4 (PDZ domain) with their respective PDZ Binding Motif (PBM)-containing cellular ligands, the phosphatase PTEN and the MAP kinase p38γ. We have studied the role of PDZ/PBM interactions in MAST2/PTEN and PTPN4/p38γ complexes using an integrated structural biology approach combining NMR, X-ray crystallography, SAXS to determine structures, conformational dynamics, protein-protein interactions as well as to characterize the phosphorylated states of these proteins in cellular environment. We established that the viral sequences act as competitors of the endogenous partners to hijack the kinase and phosphatase functions. The PDZ domains of MAST2 and PTPN4 contribute to the recruitment of substrates but also to the catalytic regulation modulating the phosphorylation/dephosphorylation of endogenous partners. By targeting human PTPN4 or MAST2, we also developed a rational conception of innovative therapeutic compounds that display tumoricid activity or nerve regeneration properties. 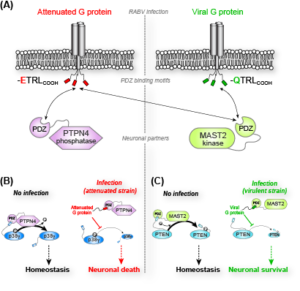 We are mostly interested in the functional and structural dynamics involved in allosteric regulation and in molecular signal transduction. Our aim is now to extend our fundamental knowledge on the transient protein-protein interactions typically found for ligand-PDZ complex, and on the role of PDZ domains in regulating catalytic activity of enzyme by intra- and inter-molecular mechanisms. The modular organization of large proteins such as kinases MAST2 and p38g, phosphatases PTPN3, PTPN4 and PTEN, and the transient nature of post-translational modifications and of PBM/PDZ interactions represent major challenges to study these molecular systems. All these proteins involved in neuronal signal transduction are targeted by viral protein during infection (Rabies, Papillomavirus, and Hepatitis B viruses) and/or are shown to have mutation(s) in major human diseases (colorectal, lung, breast, prostate, glioblastoma and gastric cancers). Thus, we will decipher the folding and the role of these kinase/phosphatase complexes MAST2/PTEN and PTPN3,4/p38g both in vitro and in cells.