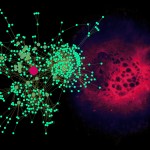 Sitting at the frontier between the fields of Chemistry, Glycosciences, and Vaccinology, FlexBiVac is a multidisciplinary project aimed at demonstrating the proof of concept for a new generation of polysaccharide-based multivalent vaccines.

The concept is tackled for bacillary dysentery, one of the four major diarrheal diseases among children under 5. Killing 800,000 children annually, more than AIDS and malaria combined, diarrheal diseases are the second cause of childhood mortality. The need for a multivalent vaccine against Shigella, the causing agent of bacillary dusentery,  is a critical issue and a roadblock to a licensed vaccine. Regarding Shigella flexneri, the prevalent species, a cocktail of 4 serotypes would cover 80% and possibly up to 90% of all cases.

High chemical similarities amongst the S. flexneri surface polysaccharides and the possible implementation of highly convergent synthetic strategies to fragments thereof  support the use of synthetic functional mimics of these protective antigens for developing a vaccine. The proof of concept was demonstrated for a monovalent synthetic carobohydrate-based vaccine candidate, paving the way towards a powerful “drug-like” multivalent Shigella vaccine.

By combining a monovalent chemically defined glycoconjugate vaccine candidate ready for clinical evaluation  with the most promising glycoconjugates to be identified for other serotypes, FlexBiVac aims at making the proof of concept for a synthetic carbohydrate-based di- and trivalent S. flexneri combinations, essential to move forward to the required vaccine candidate.