Eliane Meurs  has a solid expertise on signaling pathways leading to induction of IFN and on the mechanism of action of the dsRNA-dependent protein kinase PKR. E.Meurs was originally responsible for the cloning of this kinase which opened the door to its study, worldwide. She was also pionneer in demonstrating that PKR modulates signaling pathways involved in inflammation. PKR is now emerging as an important kinase related to stress. Current studies of the team focus on the modulation of several signalling pathways by viral infections such as Hepatitis C virus linked to autophagy, deregulation of lipid metabolism and insulin resistance. The team investigates also the role of PKR in stress-associated neurodegenerative diseases such as Alzheimer disease and is generating novel PKR inhibitors through screening of chemical compound libraries. 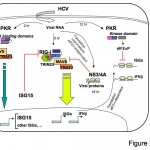 While potentially able to activate an immune response, the Hepatitis C virus establishes in a chronic infection in the majority of patients with progressive inflammation and degradation of the liver over time. Intensive research […]

Interaction of HCV with the IFN and stress pathways

Cells respond to invasion by bacterial or viral pathogens with the production of IFNs and pro-inflammatory cytokines, as a first line of their innate immune response. This is due to their ability to detect […]

Chronic infections with Hepatitis C (HCV) and Hepatitis B (HBV) viruses (which infect 170 and 350 million persons in the world, respectively) lead to development of cirrhosis and are responsible for 80% of hepatocellular […]