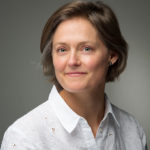 “Organs-on-Chips and the Future of Disease Modeling”

“Cell biology of Listeria translocation across the intestinal epithelium”

Microbial translocation across the host intestinal barrier is a critical step for invasive foodborne pathogens. Listeria monocytogenes (Lm) causes human listeriosis, a severe foodborne infection, leading to septicemia, maternal-fetal and central nervous system infection. Lm can cross the intestinal, placental and blood-brain barriers and stands as a model pathogen to study the biology of infections. Despite extensive in vitro studies of Lm internalization into epithelial cells, the molecular and cellular mechanisms underlying Lm translocation across the intestinal epithelium in vivo remain unclear. We have shown that Lm crosses the intestinal barrier through goblet cells by transcytosis upon the interaction of the bacterial ligand called internalin with its host receptor E-cadherin. We are currently investigating the mechanisms of Lm transepithelial translocation using intestinal organoids as a model system.

The intestinal barrier is permanently exposed to mechanical forces and pathogens. Despite an increasing amount of knowledge on the molecular machineries elaborated by pathogens to manipulate the host cell, our understanding regarding the impact of mechanical forces on their interactions and invasion at the tissue level remains limited.Using Intestine-Chip technology, I will present our results showing how the 3D architecture of the epithelium as well as mechanical cues impact the infectivity of the human pathogen Shigella. Strikingly, we found that infection was significantly increased and minimal bacterial loads were sufficient to invade enterocytes from the apical side and to trigger loss of barrier integrity, thereby shifting the paradigm about the early stage of Shigella invasion. We found that Shigella quickly colonize epithelial crypt-like invaginations and demonstrates the essential role of the topology. Furthermore, by modulating each of the mechanical forces, we uncovered the impact of peristalsis on infection. Collectively, our results reveal that Shigella takes advantage of the micro-architecture and mechanical forces to invade the gut. This approach opens new avenues for studying infection of human restricted enteric pathogens.

It’s been known for quite some time that the health of tissues outside of the brain has a strong influence on brain function. For example, exercise is the most potent known regulator of neurogenesis in the adults, whereas stress is a strong negative regulator. Certain drugs, such as the diabetes drug metformin, also have well-known effects on neurogenesis. Work in a number of labs, including ours, in the last few years has also shown that (a) Classical CNS disorders, such as Parkinson’s disease, involve genes that are expressed in multiple peripheral tissues; (b) Peripheral tissues are often symptomatic in CNS disease; (c) Peripheral tissues synthesize and secrete numerous factors into the blood that affect brain function. I will discuss the therapeutic implications of achieving a greater understanding of how peripheral physiology affects the central nervous system.