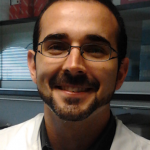 We developed a novel image-based microscopy assay which allows to discriminate Listeria monocytogenes cellular entry from vacuolar escape, enabling high-content screening to identify factors specifically involved in these two steps. We generated a L. monocytogenes strain expressing a β-lactamase covalently attached to the bacterial cell wall, which can cleave a Förster resonance energy transfer (FRET) probe CCF4 loaded in the cytoplasm of target cells: the probe will be only cleaved by bacteria which escape their phagosomes. To discriminate between non-invading bacteria and bacteria trapped in phagosomes we perform subsequently a differential immunofluorescence staining to distinguish extracellular versus total bacterial populations in samples that were also analyzed by the FRET-based assay.