Team: Pathophysiology of the immune system, Inserm U1223 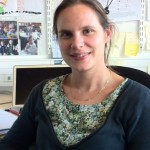