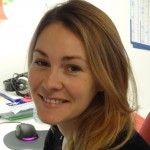 Initial adhesion of bacterial cells to surfaces or host tissues is a key step in colonisation and biofilm formation processes, and is mediated by cell surface appendages. We previously demonstrated that Escherichia coli K-12 possesses an arsenal of silenced chaperone-usher fimbriae that are functional when constitutively expressed. Among them, production of prevalent Yad fimbriae induces adhesion to abiotic surfaces. We undertook functional characterisation of Yad fimbriae, and identified YadN as the most abundant and potential major pilin, and YadC as the potential tip-protein of Yad fimbriae. We showed that Yad production participates to binding of E. coli K-12 to human eukaryotic cells (Caco-2) and inhibits macrophage phagocytosis, but also enhances E. coli K-12 binding to xylose, a major component of the plant cell wall, through its tip-lectin YadC. Consistently, we demonstrated that Yad production provides E. coli with a competitive advantage in colonising corn seed rhizospheres. The latter phenotype is correlated with induction of Yad expression at temperatures below 37°C, and under anaerobic conditions, through a complex regulatory network. Taken together, these results suggest that Yad fimbriae are versatile adhesins that beyond potential capacities to modulate host-pathogen interactions might contribute to E. coli environmental persistence.