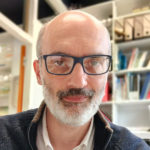 In eukaryotes, ribosome biogenesis is a highly conserved process that starts in the nucleus and ends in the cytoplasm. In actively growing yeast cells, it is estimated that each nuclear pore complex (NPC) contributes to the export of about 25 pre-ribosomal particles per minute. Such an extremely active process requires several redundant export receptors for the pre-60S particles. Here, we report the identification of a novel pre-60S factor, Ecm1, which partially acts like Arx1 and becomes essential when the NPC function is affected. Ecm1 depletion, combined with the deletion of NPC components led to pre-60S retention in the nucleus. Functional links that we identified between Ecm1, 60S biogenesis, pre-60S export, and the NPC were correlated with physical interactions of Ecm1 with pre-60S particles and nucleoporins. These results support that Ecm1 is an additional factor involved in pre-60S export. While Ecm1 and Arx1 have redundant functions, overproduction of either one could not complement the absence of the other, whereas overproduction of Mex67 was able to partially restore the growth defect resulting from the absence of Ecm1 or Arx1. These data highlight the involvement of many factors acting together to export pre-60S particles.