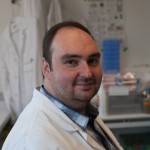 Epidemiological and experimental observations suggest that chronic microbial colonization can impact the immune control of other unrelated pathogens contracted in a concomitant or sequential manner. Possible interactions between Mycobacterium tuberculosis infection and persistence of other bacteria have scarcely been investigated. Here we demonstrated that natural colonization of the digestive tract with Helicobacter hepaticus in mice is concomitant with modification of the gut microbiota, subclinical inflammation, and drastic impairment of immune control of the growth of subsequently administered M. tuberculosis, which results in severe lung tissue injury. Our results provided insights upon the fact that this prior H. hepaticus colonization leads to failures in the mechanisms that could prevent the otherwise balanced cross-talk between M. tuberculosis and the immune system. Such disequilibrium ultimately leads to the inhibition of control of mycobacterial growth, outbreak of inflammation, and lung pathology. Among the dysregulated immune signatures, we noticed a correlation between the detrimental lung injury and the accumulation of activated T-lymphocytes. Our findings suggest that the impact of prior Helicobacter spp. colonization and subsequent M. tuberculosis parasitism might be greater than previously thought, which is a key point given that both species are among the most frequent invasive bacteria in human populations.