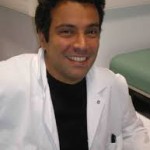 Asymmetric Cell Division (ACD) is a simple and conserved mechanism to generate cell diversity during embryogenesis and throughout adult life. In this process, a mother cell divides to generate two daughter cells with distinct developmental potentials. In some cases, this fate asymmetry results from the unequal segregation of fate determinants (proteins, ARNs, organelles). One of the best known example of such division asymmetry is the unequal segregation of the protein Numb in dividing Sensory Organ Precursor cells (SOPs) in the fly:

Cell polarization of the mother cell is essential for asymmetric cell division. it often involves asymmetric localization of the PAR complex (Par3-Par6-aPKC). In dividing SOPs, the Par3-Par6-aPKC complex localizes at the posterior cortex and is critical to localize Numb at the opposite pole. We are currently investigating how the conserved Par3-Par6-aPKC complex becomes asymmetric in SOPs. We have recently found that tissue polarity (i.e. Frizzled/Planer Cell Polarity signaling) is required for the initial planar poalrization of PAR proteins prior to mitosis. This initial asymmetry is then amplified at mitosis.