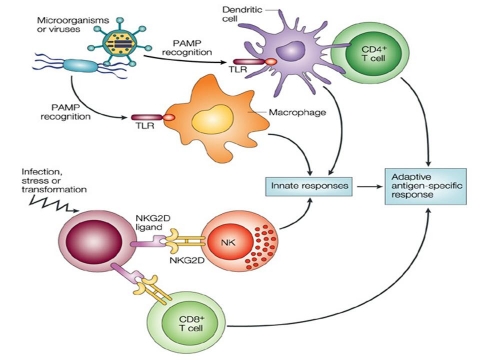 Reciprocal activation of NK cells and DCs through NK/DC interactions is now recognized to be an important dynamic issue connecting the innate and adaptive arms of the immune sys¬tem. An activation of NK cells was reported in response to DC-based vaccination, suggesting that NK cell acti¬vation play a role in generating an immune response to vaccines. Additional evidence is still required to elucidate the significance of human NK/DC cross-talk in vivo and to identify the best correlates of protection against infection or disease progression. Therefore, our aim is to evaluate how DC loaded with different kind of HIV antigens (lipopeptides and MVA constructions used in ANRS trials) modulates the NK/DC cross-talk in vitro in order to mount an anti-HIV protective response. We plan to characterize NK cells activated by HIV-loaded DC in term of receptor expression, cytolytic and secretory capacities. We used an in vitro co-culture model of NK cells with HIV-loaded monocyte-derived DC (MDDC) or not in autologous condition. We expect to define the best combination of HIV antigens able to activate the appropriate NK cell subset to help the anti-HIV T cell specific response.

Our results strongly suggest a role of the CD85j receptor/ligand interaction in the control of HIV-1 replication in MDDC. CD85j is an inhibitory receptor expressed on NK cells and other hematopoietic cells. The known ligands for CD85j are classical and nonclassical HLA Class I molecules and a viral ligand, UL18, encoded by human CMV. Our results led us to raise the hypothesis that the functional result (inhibition of NK cytotoxicity or suppression of HIV-1 infection of DC) of the interaction of CD85j receptor with its ligands on DC might depend on the affinity of the receptor-ligand interaction. The high affinity interaction of CD85j with HLA class I ligand(s) could induce internalization of the receptor and inhibitory signals, as previously reported. Conversely, the interaction of CD85j with ligand(s) with low affinity could abolish the inhibitory signals and thus contribute to the control of HIV-1 infection mediated by CD85j+ NK cells. Thus, our first objective is to test this hypothesis by analyzing the parameters of NK-DC cross talk induced by CD85j ligands with different affinities for the receptor. We will use variants of the HCMV UL18 protein that have different affinities for CD85j as ligands and the NK-DC coculture system previously set up. We will measure NK cell proliferation, cytokine/chemokine secretion and cytolytic activity after stimulation of NK cells with UL18 ligands. In addition, we will try to identify non HLA class I CD85j ligand(s) expressed on DC after HIV infection (viral or cellular induced CD85j ligand) by proteinchip analysis and co-immunoprecipitation.Finally, we will investigate also precisely which steps of the HIV replication in DCs are affected. To do this, we will study NK influence of infected DC on reverse transcription, integration of viral DNA by quantification of the retro transcripts with PCR in real time.

Some examples of NK cell receptors that have been recently related to the control of HIV-1 infection or to protection against disease. 1. Activating receptors KIR3DS1 and NKG2D. The presence of KIR3DS1 co-inherited with the HLA-Bw4-80I allele has been correlated to a slower progression to disease. Although HLA-Bw4 was not identified as the KIR3DS1 ligand, in HIV-infected cells a viral peptide (red bar) may bind HLA-Bw4 and make it recognizable by the KIR3DS1 allowing killing of the infected cells. Other authors have correlated KIR3DS1 to a higher CD4 T cell levels and HLA-Bw4-80I allele to lower HIV-1 RNA but have not confirmed the synergistic effect of KIR3DS1 and HLA-Bw4-80I. NKG2D may lyse HIV-1 infected cells through binding to its ligands ULBP 1,2,3 that are upregulated on HIV-infected cells. 2. Inhibitory receptor KIR3DL1. The simultaneous presence of KIR3DL1 and its ligand HLA-Bw4-80I have been correlated to protection against disease in HIV-1 infected patients. High expression of the inhibitory KIR3DL1 may confer to NK cells higher cytotoxic capacity when target infected cells do not express the KIR3DL1 ligand. 3. CD85j NK cells are able to suppress HIV-1 replication in infected DC in vitro upon contact with HIV-1 infected DC. Viral suppression appears to be mediated by the interaction between the CD85j receptor on NK cells and an unknown ligand expressed on HIV-1-infected DC. 4. High NK cell activation has been associated to the resistance to HIV-1 infection in exposed uninfected individuals (EU). NK cell activation in EU may result either from the predominant expression of activating over inhibitory NKR or from the lack of HLA ligands for inhibitory KIR. Both enhanced NK cell cytotoxic activity and secretion of anti-viral cytokines or chemokines may contribute to the protection against HIV-1 infection. 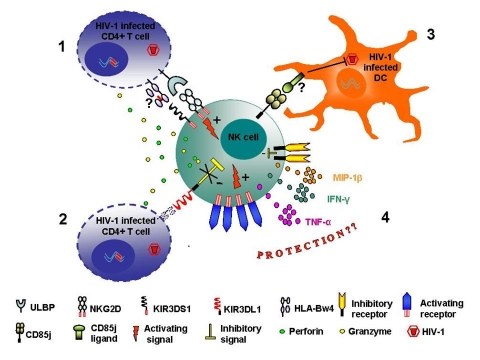 The immune system activation plays a major role in HIV pathogenesis. Natural CD4+CD25+FoxP3+ regulatory T cells play an important role in the control of activation and prevention of inflammatory diseases. In the context of HIV, Tregs could have a beneficial role by reducing the general immune activation but, on the other hand, they could also prove to be deleterious by hampering anti-HIV effector cell function. Natural Tregs apart, other regulatory T-cell subsets including CD8 Tregs may help to control activation. We aim to gauge the balance between different regulatory T cell subsets and T cell effector function in order to gain insight into the interplay between regulatory mechanisms and antiviral immunity and its role in AIDS pathogenesis.