Arenaviruses are important agents of zoonotic disease worldwide. The virions expose a tripartite envelope glycoprotein complex (GPC) at their surface, formed by the glycoprotein subunits GP1, GP2 and the stable signal peptide (SSP). This complex is responsible for binding to target cells and for the subsequent fusion of viral and host-cell membranes for entry. During this process, the acidic environment of the endosome triggers a fusogenic conformational change in the transmembrane GP2 subunit of the complex.

The crystal structure of the recombinant GP2 ectodomain of the lymphocytic choriomeningitis virus (LCMV), the arenavirus type species, was solved at 1.8 Å resolution. The structure shows the characteristic trimeric coiled coil present in class I viral fusion proteins, with a central stutter that allows a close structural alignment with most of the available structures of class I and III viral fusion proteins. The structure further shows a number of intra-chain salt bridges stabilizing the post-fusion hairpin conformation, one of which involves an aspartic acid that appears released from a critical interaction with SSP upon low pH activation. 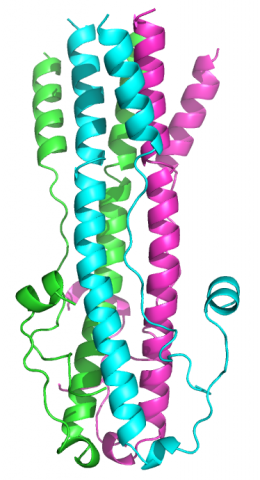 Structure of the LCMV GP2 trimer in post-fusion form.