Trypanosomes and Leishmania spp. are parasitic protozoans responsible for major human diseases, which account for ~24 million persons infected worldwide, with over 600 million people at risk. Sleeping sickness, caused by Trypanosoma brucei, is a fatal disease if untreated. However, there is no vaccine, existing medications have severe side effects (including death) and drug resistance is increasing dramatically. Similar problems are encountered for Chagas disease (T. cruzi) and leishmaniases (Leishmania spp.). Trypanosomatids (including trypanosomes and Leishmania spp.) are also famous for a variety of very unusual biological, genetic and biochemical features that stimulate broad scientific and evolutionary interest. Among the numerous exotic mechanisms developed by these parasites, several atypical metabolic pathways have been discovered. These unconventional biological processes can be considered as potential therapeutic targets. Since 2005, several genome-sequencing projects (including those for T. brucei, T. cruzi and three Leishmania spp.) have been completed (with the involvement of Partner 1), providing a tool to determine their very atypical metabolic potentialities, such as the metabolic capabilities of the enigmatic glycosomes only described in trypanosomatids and some phylogenetically closely related protozoan groups. Glycosomes are peroxisome-like organelles primarily filled up with glycolytic enzymes (up to 90% of the glycosomal content in bloodstream trypanosomes – BSF). Although glycolysis has been extensively studied in both the tsetse midgut procyclic stage (PCF; for abbreviations, see at the end of the document in Chapter 5) and BSF trypanosomes, very little is known about other predicted glycosomal pathways and many questions regarding their expression, topology, roles in development and virulence, as well as regulation and interaction with the other subcellular compartments remain largely unanswered.

Our project primarily concerns the analysis of unconventional metabolic pathways occurring in the glycosomes of trypanosomatids, especially in the African trypanosome T. brucei, which became the most efficient model to study this parasitic group since the development of very powerful reverse genetic tools (RNAi, RNA interference). GLYCONOV is a basic research project with potential applications aiming to characterize new metabolic pathways recently highlighted by the GLYCONOV partners in both the insect stage (PCF) and the mammalian stages (BSF) of T. brucei.

The aim of this project is to determine the role of three poorly investigated glycosomal metabolic pathways, recently highlighted by GLYCONOV partners, i.e. gluconeogenesis and glycerol metabolism (Task 1), a novel NADPH-generating pathway via glycosomal isocitrate dehydrogenase (IDHg) and its role for NADPH-consuming ether lipid biosynthesis (Task 2) and nucleotide sugar biosynthesis (Task 3), in PCF (Tasks 1-3) as well as in BSF (Task 4) trypanosomes. Our network presents the advantage of combining state-of-the-art qualitative and quantitative global metabolomic approaches, as well as proteomics, to analyse a large collection of RNAi and knockout mutants (over 100 available so far), affecting most of the known steps of the intermediary metabolism. GLYCONOV will contribute to understand the biological function of this enigmatic organelle and will highlight new essential enzymes that could ultimately be targeted to fight sleeping sickness and other important tropical diseases caused by related trypanosomatids parasites. 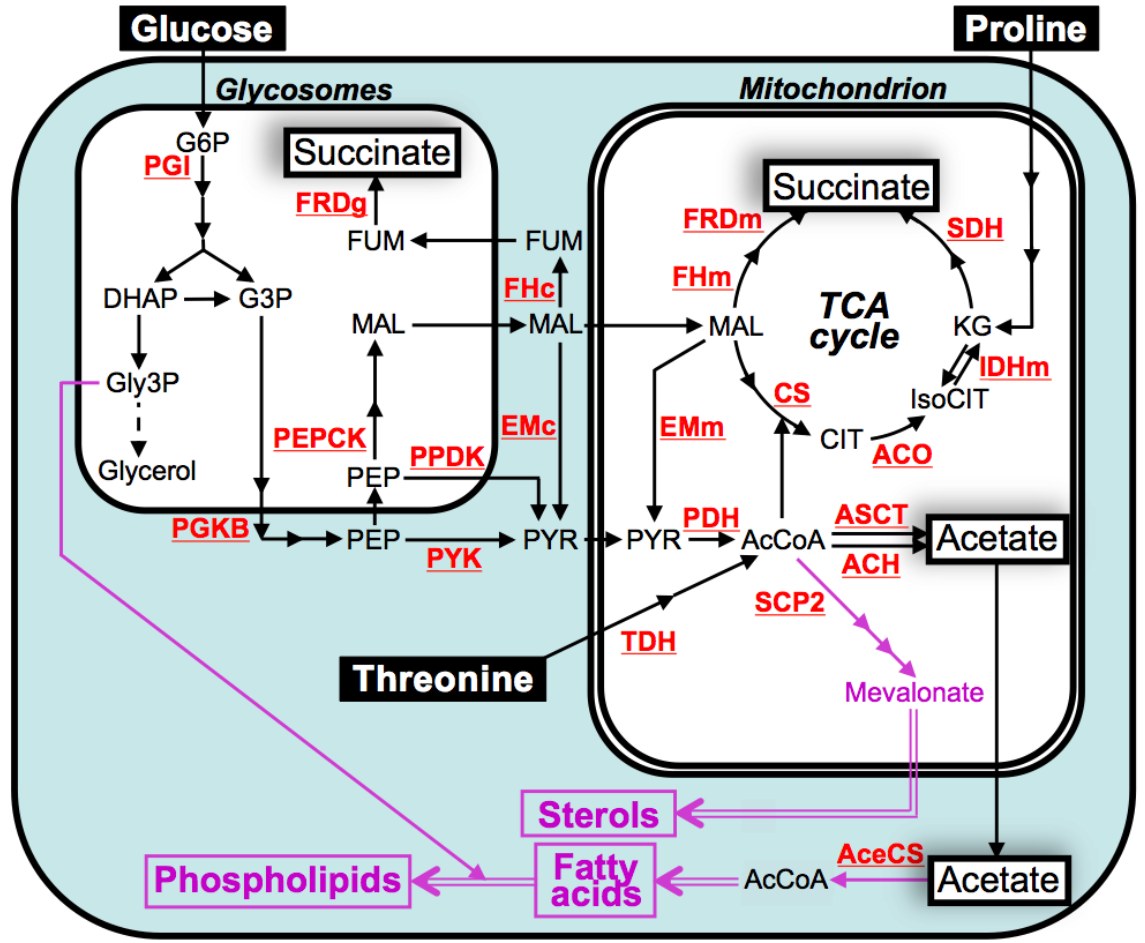