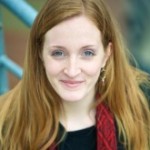 Sarah Vozlinsky is the Program Development Coordinator for the Pasteur Center for Global Health.

Sarah joined the Institut Pasteur in January 2014 to work on the development of the Center for Global Health, which was officially launched in September 2014, with Pr. Arnaud Fontanet.

In July 2015, she initiated the development of a new multi-partner continental initiative with the 10 Institut Pasteur in Africa and international partners: the Pan-African Coalition for Training (PACT) in Research and Public Health.