After a BTS in Biotechnology (1996) at ENCPB – Paris, Agnes DUBOIS started her career as a Technician and went through different fields in several companies. First, working for an industrialist (EUROVANILLE-|1997-2001) she has successfully driven an innovative research project onto the Vanilla orchid. Moving then to an academic institute (CENTRE NATIONAL DE GENOTYPAGE|2001-2003), she was involved into the identification of Human disease genes and genetic variants. After a short incursion into the hospital world (HEGP|2003-2004), she worked for a start-up (MOLECULAR CYTOGENETICS LABS|2004-2006) onto the development and quality certification of Human pan genomic bio-chips.
Since she joined the Philip AVNER’s lab at the INSTITUT PASTEUR – Paris in 2006, she has been particularly captivated to understand early epigenetic mechanisms of regulation of X Chromosome Inactivation, providing her a strong proficiency into embryonic stem cells culture, chromatin and non-coding RNAs fields of expertise, and, allowing her to validate an Ingenieur CNAM – Paris qualification in 2010. Finally, in 2013, she contributed to the establishment of the Epigenomics, Proliferation and Cell Identity lab in which she holds her current position. Her main focus deals with the deciphering of Chromatin regulation at the locus of the stemness-related marker Nanog in embryonic stem cells. 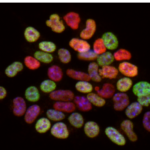