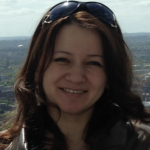 Mouse embryonic stem cells have an inherent propensity to explore gene regulatory states associated with either self-renewal or differentiation. This property depends on ERK, which downregulates pluripotency genes such as Nanog. Here, we aimed at identifying repressive histone modifications that would mark Nanog for inactivation in response to ERK activity. We found that the transcription factor ZFP57, which binds methylated DNA to nucleate heterochromatin, is recruited upstream of Nanog, within a region enriched for histone H3 lysine 9 tri-methylation (H3K9me3). Whereas before differentiation H3K9me3 at Nanog depends on ERK, in somatic cells it becomes independent of ERK. Moreover, the loss of H3K9me3 at Nanog, induced by deleting the region or by knocking out DNA methyltransferases or Zfp57, is associated with reduced heterogeneity of NANOG, delayed commitment into differentiation and impaired ability to acquire a primitive endoderm fate. Hence, a network axis centred on DNA methylation, ZFP57 and H3K9me3 links Nanog regulation to ERK activity for the timely establishment of new cell identities. We suggest that establishment of irreversible H3K9me3 at specific master regulators allows the acquisition of particular cell fates during differentiation.