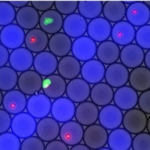 In humans, several grams of IgA are secreted every day in the intestinal lumen. While only one IgA isotype exists in mice, humans secrete IgA1 and IgA2, whose respective relations with the microbiota remain elusive. We compared the binding patterns of both polyclonal IgA subclasses to commensals and glycan arrays and determined the reactivity profile of native human monoclonal IgA antibodies. While most commensals are dually targeted by IgA1 and IgA2 in the small intestine, IgA1+IgA2+ and IgA1-IgA2+ bacteria coexist in the colon lumen, where Bacteroidetes is preferentially targeted by IgA2. We also observed that galactose-α terminated glycans are almost exclusively recognized by IgA2. Although bearing signs of affinity maturation, gut-derived IgA monoclonal antibodies are cross-reactive in the sense that they bind to multiple bacterial targets. Private anticarbohydrate-binding patterns, observed at clonal level as well, could explain these apparently opposing features of IgA, being at the same time cross-reactive and selective in its interactions with the microbiota.