Clostridium difficile (CD), recently reclassified as Clostridioides difficile, a Gram-positive spore-forming anaerobic bacterium, has rapidly emerged as the leading cause of antibiotic-associated diarrheal disease in hospitals worldwide. The incidence and severity of CD infections (CDI) have increased dramatically over the past decade, which is due in part to the emergence of new epidemic strains such as the ribotype 027 involved in recent outbreaks in US and Europe. The mechanisms involved in the prevalence and virulence of the emergent CD strains still represent an important challenge that will need to be addressed over the next years. Accordingly, bacteriophages must be taken into account since it is known that they contribute to the evolution of pathogenic bacteria. In CD, a significant part of the genome consists of mobile genetic elements such as conjugative transposons and prophages. Interestingly, most strains of CD carry one or more prophages and some of them can influence the expression of toxin genes, the main virulence factors of CD. Moreover, we recently demonstrated in our laboratory that the prophage-like element called “skin”, present in the genome of most CD strains, intervenes in the sporulation process. These evidences strongly underline a critical role of phages in the evolution of CD virulence. However, little is known about CD phages and only few have been published. In collaboration with Louis-Charles (L.C.) Fortier (Université de Sherbrooke, Canada), we already have an ongoing project aiming at sequencing and characterizing new CD phages. This work allowed us to describe a new and prevalent family of large CD phages. In a context where treatments are becoming limited (i.e. increased antibiotic resistant CD strains), phages can be used as an attractive treatment option for CDI. However, strictly virulent CD phages are still unavailable and the temperate nature of current known phages limits their therapeutic exploitation. 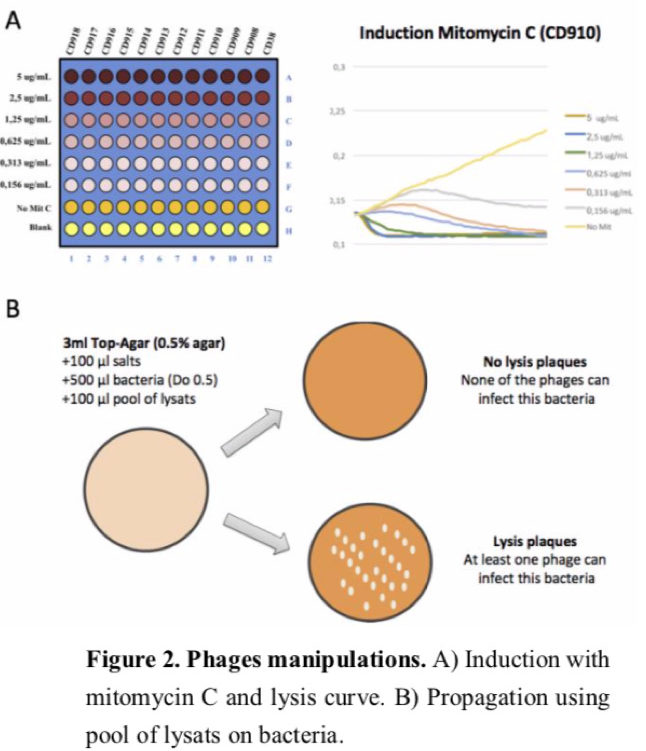