Professor “Classe exceptionnelle” at Institut Pasteur, laboratory of Genetics and Physiology of Hearing

Board of scientific advisors of Institut Pasteur (2013- )

Member of the Orientation Committee of Musée de l’Homme (2012- )

Board of Directors of Minna-James-Heineman Foundation, Germany (2011- )

Member of the Scientific Council of Louis-Jeantet Foundation (2011- )

Board of the Scientific Council of ParisTech (2008- )

Board of Directors of Institut Carnot “Seeing and Hearing” (2006- )

Fellow of the Institute of Medicine of the National Academies, USA (2011)

Fellow of the French Academy of Sciences (2002)

In 2002, she was appointed Professor at College de France where she holds the chair of “Genetics and Cellular Physiology”. She is currently the head of the “Genetics and Physiology of Hearing laboratory” (Inserm Unit UMRS 1120) at Institut Pasteur.

Through her work on the structure of the human genome, Christine Petit elucidated the origin of sex inversion in humans, which results in XX males and XY females. She then focused on the sensory systems and attempted to understand the hereditary defects of olfaction and subsequently hearing (and vision, to a lesser extent). After identifying the first gene responsible for a total absence of smell in humans (the X-linked gene responsible for Kallmann syndrome), she developed experimental conditions for the study of hereditary deafness. This approach led to the identification of a large number of deafness-causing genes, most of which are implicated in early forms of deafness. She then elucidated the underlying mechanisms associated with these genes, and classified them into a number of physiopathological categories. She developed an interdisciplinary approach to decipher various aspects of the cellular and molecular basis of acoustic signal processing by the auditory system.

The overall aim of Christine Petit’s laboratory is: i) to understand the cellular and molecular mechanisms underlying sound processing in the auditory system; ii) to identify defects in these processes that lead to hearing impairment; and (iii)  to prevent the occurrence of such defects and treat them. The hair bundle, which plays a central role in sound processing, is a main focus of her research. In particular, she focuses on key aspects of the hair bundle, including understanding how it is built up, how it achieves its elementary functions of mechanotransduction, frequency tuning response and analysis, waveform distortion and suppressive masking, how it ensures the interplay between these activities and how these properties are coupled to the cytoarchitecture of its structure. Her interest in sound processing has since extended to the study of the central auditory system . The neurogenetic approaches established in her laboratory are now being applied to identify genes associated with presbycusis. New insight gained from these advances will foster the development of novel therapeutic approaches.

L’Oreal-UNESCO: “For Women in Science” Award-Europe, 2004 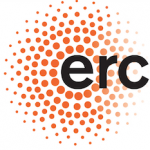 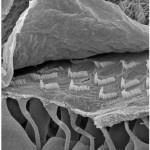 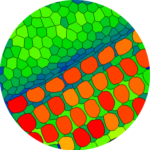 TissueMiner is a framework to perform a multiscale analysis of an entire developing epithelium acquired at cellular resolution over several hours or days. It includes (a) tools to build a database from a timelapse […]