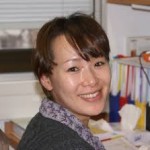 Although the ontogeny of hematopoietic stem cells (HSCs) in vertebrates has been studied intensely, a lineage relationship between the HSCs found in the developmentally successive hematopoietic organs remains to be shown. By using an in situ photoactivatable cell tracer in the transparent zebrafish embryo, we demonstrated that definitive blood precursors appeared between the dorsal aorta and axial vein, validating the homology of this tissue with the AGM (aorta-gonad-mesonephros) of amniotes. These cells first migrated through the blood to a previously undescribed caudal hematopoietic tissue (CHT), where they differentiated, expanded, and further migrated to seed the definitive hematopoietic organs, the thymus and kidney. Immigrants on the way to the thymus expressed c-myb and ikaros but not rag1; they were probably no longer HSCs, however, because they lacked scl and runx1 expression, unlike immigrants to the kidney. The CHT thus has a hematopoietic function similar to that of the mammalian fetal liver.