The RNase J-Based RNA Degradosome Is Compartmentalized in the Gastric Pathogen Helicobacter pylori. 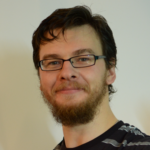 Posttranscriptional regulation is a major level of gene expression control in any cell. In bacteria, multiprotein machines called RNA degradosomes are central for RNA processing and degradation, and some were reported to be compartmentalized inside these organelleless cells. The minimal RNA degradosome of the important gastric pathogen Helicobacter pylori is composed of the essential ribonuclease RNase J and RhpA, its sole DEAD box RNA helicase, and plays a major role in the regulation of mRNA decay and adaptation to gastric colonization. Here, the subcellular localization of the H. pylori RNA degradosome was investigated using cellular fractionation and both confocal and superresolution microscopy. We established that RNase J and RhpA are peripheral inner membrane proteins and that this association was mediated neither by ribosomes nor by RNA nor by the RNase Y membrane protein. In live H. pylori cells, we observed that fluorescent RNase J and RhpA protein fusions assemble into nonpolar foci. We identified factors that regulate the formation of these foci without affecting the degradosome membrane association. Flotillin, a bacterial membrane scaffolding protein, and free RNA promote focus formation in H. pylori Finally, RNase J-GFP (RNase J-green fluorescent protein) molecules and foci in cells were quantified by three-dimensional (3D) single-molecule fluorescence localization microscopy. The number and size of the RNase J foci were found to be scaled with growth phase and cell volume as previously reported for eukaryotic ribonucleoprotein granules. In conclusion, we propose that membrane compartmentalization and the regulated clustering of RNase J-based degradosome hubs represent important levels of control of their activity and specificity.IMPORTANCEHelicobacter pylori is a bacterial pathogen that chronically colonizes the stomach of half of the human population worldwide. Infection by H. pylori can lead to the development of gastric pathologies such as ulcers and adenocarcinoma, which causes up to 800,000 deaths in the world each year. Persistent colonization by H. pylori relies on regulation of the expression of adaptation-related genes. One major level of such control is posttranscriptional regulation, which, in H. pylori, largely relies on a multiprotein molecular machine, an RNA degradosome, that we previously discovered. In this study, we established that the two protein partners of this machine are associated with the membrane of H. pylori Using cutting-edge microscopy, we showed that these complexes assemble into hubs whose formation is regulated by free RNA and scaled with bacterial size and growth phase. Organelleless cellular compartmentalization of molecular machines into hubs emerges as an important regulatory level in bacteria.