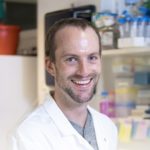 Host-pathogen interactions impose recurrent selective pressures that lead to constant adaptation and counter-adaptation in both competing species. Here, we sought to study this evolutionary arms-race and assessed the impact of the innate immune system on viral population diversity and evolution, using Drosophila melanogaster as model host and its natural pathogen Drosophila C virus (DCV). We isogenized eight fly genotypes generating animals defective for RNAi, Imd and Toll innate immune pathways as well as pathogen-sensing and gut renewal pathways. Wild-type or mutant flies were then orally infected with DCV and the virus was serially passaged ten times via reinfection in naive flies. Viral population diversity was studied after each viral passage by high-throughput sequencing and infection phenotypes were assessed at the beginning and at the end of the evolution experiment. We found that the absence of any of the various immune pathways studied increased viral genetic diversity while attenuating virulence. Strikingly, these effects were observed in a range of host factors described as having mainly antiviral or antibacterial functions. Together, our results indicate that the innate immune system as a whole and not specific antiviral defence pathways in isolation, generally constrains viral diversity and evolution.