BACKGROUND: The extended role of vascular endothelial growth factor (VEGF) in human pathophysiology led us to evaluate pre-analytical parameters possibly influencing its levels in peripheral blood and tissues. The effects on VEGF protein levels and mRNA expression were measured after storage delay (blood and tissue), use of different types of anticoagulants (blood), and after different numbers of freeze-thaw cycles (blood).

METHODS: Blood from healthy donors was sampled simultaneously in ethylene diamine tetraacetic acid (EDTA), acid citrate dextrose (ACD-A), hirudin, and serum separation tubes. For each anticoagulant, VEGF was measured by enzyme-linked immunosorbent assay (ELISA) with different conditions of delay at 4°C before centrifugation (2 h, 4 h, or 48 h) and of different numbers of freeze-thaw cycles (1, 2, and 10). The transcripts coding for the VEGF165 isoform were quantified in peripheral blood mononuclear cells by RT-PCR. Muscle biopsy samples were frozen with delays of 15, 30, or 60 min after surgery. VEGF expression was quantified on immunofluorescence stained slides.

RESULTS: The period of storage and the number of freeze-thaw cycles correlated with an increase in the levels of circulating VEGF (for each anticoagulant but not for serum) and its expression in PBMCs. VEGF expression measured from muscle biopsy sections was higher with freezing delays, with a peak at 30 and 60 min as compared to 15 min.

CONCLUSIONS: The most reliable conditions for measuring both circulating VEGF and its gene expression are to reduce time between blood collection and centrifugation, and to avoid multiple freeze-thaw cycles. Serum collection tubes with no additive and no separator were less sensitive to the pre-analytical variations analyzed in this study. Freezing delay had a significant influence on VEGF protein expression in tissue samples. 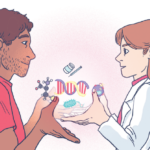 Diagmicoll : Collection of bioresources from healthy subjects or patients, in order to develop and validate new diagnosis methods and for undertaking infectious and tropical diseases diagnosis expert assessments

Type of collection : Open cohort with a direct implementation for scientific purposes. The collection constituted of samples collected from a prospective cohort of healthy volunteers. Rationale : The development of biological and molecular […]