Trichosporonosis is a rare invasive infection in humans mainly due to Trichosporon asahii, and especially recovered from patients having haematological malignancy. Since 2012, IGS1 region sequencing is used as a genotyping method to distinguish isolates, with high frequency of one haplotype worldwide and a geographic specificity for some haplotypes.We compared the IGS1 genotyping method and whole genome sequencing (WGS) to study the relationship between clinical isolates involved in two grouped cases in France.IGS1 sequencing and antifungal susceptibility testing were performed for 54 clinical isolates. Clinical data for 28 isolates included in surveillance programs were analysed. Whole genome was sequenced for 32 clinical isolates and the type strain.All isolates were intrinsically resistant to flucytosine, while voriconazole had the most potent in vitro activity. The majority of the isolates was recovered from patients with haematological malignancies (42.86%), with a high proportion of children (<15 yrs-old, 32.14%) and a high mortality rate at three months (46.15%). Based on the WGS analysis, isolates exhibiting IGS1 haplotype 1, 3 and 7 belonged to different clades. Five isolates recovered during the first grouped cases had the same IGS1 haplotype and shared 99% of SNPs similarity. For the second grouped cases, four isolates had 98.7% of SNPs similarity while the isolate recovered 4 years earlier was totally unlinked.We confirmed the usefulness of IGS1 sequencing for grouped cases infection of T. asahii. We underlined its limitation for the study of population structure and the utility of WGS analysis for the study of epidemiologically unrelated isolates. 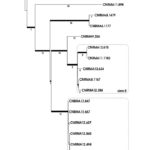