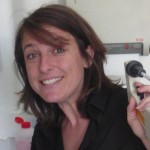 Trypanosoma brucei and related pathogens transcribe most genes as polycistronic arrays that are subsequently processed into monocistronic mRNAs. Expression is frequently regulated post-transcriptionally by cis-acting elements in the untranslated regions (UTRs). GPEET and EP procyclins are the major surface proteins of procyclic (insect midgut) forms of T. brucei. Three regulatory elements common to the 3′ UTRs of both mRNAs regulate mRNA turnover and translation. The glycerol-responsive element (GRE) is unique to the GPEET 3′ UTR and regulates its expression independently from EP. A synthetic RNA encompassing the GRE showed robust sequence-specific interactions with cytoplasmic proteins in electromobility shift assays. This, combined with column chromatography, led to the identification of 3 Alba-domain proteins. RNAi against Alba3 caused a growth phenotype and reduced the levels of Alba1 and Alba2 proteins, indicative of interactions between family members. Tandem-affinity purification and co-immunoprecipitation verified these interactions and also identified Alba4 in sub-stoichiometric amounts. Alba proteins are cytoplasmic and are recruited to starvation granules together with poly(A) RNA. Concomitant depletion of all four Alba proteins by RNAi specifically reduced translation of a reporter transcript flanked by the GPEET 3′ UTR. Pulldown of tagged Alba proteins confirmed interactions with poly(A) binding proteins, ribosomal protein P0 and, in the case of Alba3, the cap-binding protein eIF4E4. In addition, Alba2 and Alba3 partially cosediment with polyribosomes in sucrose gradients. Alba-domain proteins seem to have exhibited great functional plasticity in the course of evolution. First identified as DNA-binding proteins in Archaea, then in association with nuclear RNase MRP/P in yeast and mammalian cells, they were recently described as components of a translationally silent complex containing stage-regulated mRNAs in Plasmodium. Our results are also consistent with stage-specific regulation of translation in trypanosomes, but most likely in the context of initiation.