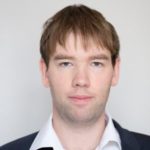 The cyanobacterial genus Microcystis is known to produce an elaborate array of structurally unique and biologically active natural products including hazardous cyanotoxins. Cytotoxic aeruginoguanidines represent a yet unexplored family of peptides featuring a trisubstituted benzene unit and farnesylated arginine derivatives. In this study, we aimed at assigning these compounds to a biosynthetic gene cluster by utilizing biosynthetic attributes deduced from public genomes of Microcystis and the sporadic distribution of the metabolite in axenic strains of the Pasteur Culture Collection of Cyanobacteria. By integrating genome mining with untargeted metabolomics using liquid chromatography with mass spectrometry, we could link aeruginoguanidine (AGD) to a nonribosomal peptide synthetase gene cluster and co-assign a significantly smaller product to this pathway, microguanidine (MGD), previously only reported from two Microcystis blooms. Further, a new intermediate class of compounds named microguanidine amides was uncovered thereby further enlarging this compound family. The comparison of structurally divergent AGDs and MGDs reveals an outstanding versatility of this biosynthetic pathway and provides insights into the assembly of the two compound subfamilies. Strikingly, aeruginoguanidines and microguanidines were found to be as widespread as the hepatotoxic microcystins, but the occurrence of both toxin families appeared to be mutually exclusive.