e.g. searching for members in projects tagged cancer
Search for
Count
IN
OUT
Content 1
Content 2
Search
Go back
Scroll to top
Share
BRC-LIMS
Exploring a link between ISGylation and cell cycle via SKP2
© Research
Project 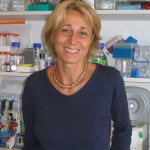 TYK2 belongs to the Janus/JAK family of protein tyrosine kinases and is involved in signaling of immunoregulatory cytokines (type I and type III IFNs, IL-6, IL-10 and IL-12 families) that contribute to a balanced immune response. Depending on the cytokine, TYK2 is co-activated with either JAK1 or JAK2, and the precise role of each kinase is not known. In human populations the TYK2 gene presents a high level of genetic variation. GWAS have linked TYK2 SNPs to a variety of systemic and organ-specific autoimmune diseases, including multiple sclerosis, systemic lupus erythematosus, rheumatoid arthritis and Crohn’s disease. We have functionally characterized three disease-associated non-synonymous variants. Two of these variants were found to be catalytically impaired but rescued signaling in response to type I IFN, IL-6 and IL-10. Thus, the catalytic deficiency of these two TYK2 hypomorphic alleles can be compensated by the partnering JAK at least in some cellular contexts and for some cytokines. Given the multitude of TYK2-activating cytokines and the cell specific requirement for TYK2, we predict that these two alleles are not neutral but rather functionally significant in complex immune disorders. Other disease-associated variants are currently being studied.