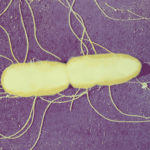 Little is known about the emergence and spread of the first antibiotic-resistant populations. It is believed, for example, that the very common penicillinase gene, blaTEM-1, discovered for the first time in E. coli in Greece in 1963, was selected by the use of ampicillin, which was released onto the market in 1961. The first outbreaks of disease caused by ampicillin-resistant strains of Salmonella enterica serotype Typhimurium were identified in the UK in 1962 and 1964.

We found that 4% (n=11) of these isolates were resistant to ampicillin because they had acquired various β-lactamase genes, including blaTEM-1, carried by various plasmids, including the virulence plasmid of S. enterica serotype Typhimurium. These isolates were from three phylogenomic groups. One isolate producing TEM-1 β-lactamase was isolated in France in 1959, and two isolates producing TEM-1 β-lactamase were isolated in Tunisia in 1960, before ampicillin went on sale. The vectors for ampicillin resistance were different from those reported in the strains responsible for the outbreaks in the UK in the 1960s.

This study shows that transmissible ampicillin resistance in S. enterica serotype Typhimurium actually emerged several years earlier than previously thought. The association between antibiotic use and the selection of resistance determinants was not, therefore, as direct as often presumed. We found that early emergence of ampicillin resistance in S. enterica serotype Typhimurium was not due to a single expansion of a clonal population that had acquired a particular plasmid encoding a βlactamase, but to multiple independent acquisitions of blaTEM gene-carrying plasmids by different bacterial populations. Our results suggest that the non-clinical use of narrow-spectrum penicillins (e.g., benzylpenicillin) may have favored the spread of plasmids carrying the blaTEM-1 gene in S. enterica serotype Typhimurium in the late 1950s.

This work was published in the Journal Lancet Infectious Diseases in February 2018.

An article from CNN discussing the data is accessible here.