The hepatitis C virus (HCV) is a major cause of chronic liver disease worldwide, leading to cirrhosis and hepatocellular carcinoma. In spite of being the focus of intense research efforts, no vaccine is available against HCV, and current therapeutic treatments have limited efficacy and significant side effects. In particular, little is known about the structure of the envelope glycoproteins of this major human pathogen, in spite of their essential role in the viral cycle.

We determined the connectivity of the 9 disulfide bonds formed by 18 cysteines within the ectodomain of HCV glycoprotein E2, which are strictly conserved across HCV genotypes. Furthermore, circular dichroism combined with infrared spectroscopy analyses revealed the secondary structure contents of E2e, indicating in particular about 28% beta-sheet, in agreement with the consensus secondary structure predictions. The disulfide connectivity pattern, together with data on the CD81 binding site and reported E2 deletion mutants, enabled the threading of the E2e polypeptide chain onto the structural template of class II fusion proteins of related flavi- and alphaviruses. The resulting model of the tertiary organization of E2 shows the amino acid distribution among the characteristic class II domains, places the CD81 binding site at the interface of domains I and III, and highlights the location of a candidate fusion loop. 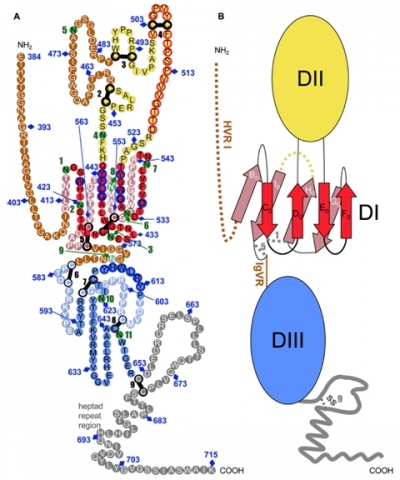 A) Disulfide bonds and glycosylation sites are indicated by thick black bars and green circles, respectively. Potentially unstructured segments are in brown, the stem region is grey. Residues that form the putative fusion loop region are encircled in red.

B) Schematic diagram of the tertiary organization of HCV E2, with DI, DII and DIII in red, yellow and blue, respectively. The β-strands in DI are labeled with the standard class II nomenclature.