The dengue virus (DENV) is a mosquito-borne member of the flavivirus genus responsible for roughly 50 million human infections each year. DENV is composed of four distinct but serologically related flaviviruses, which circulate in tropical and subtropical regions of the globe. Infection by any of the four DENV serotypes may cause a self-limiting febrile illness that is rarely fatal, and is thought to confer immunity to reinfection by the same serotype of DENV.

Although DENV infection induces lifelong immunity against viruses of the same serotype, the antibodies raised appear to contribute to severe disease in cases of heterotypic infections, including hemorrhage and shock. Understanding the mechanisms of DENV neutralization by antibodies is, therefore, crucial for the design of vaccines that simultaneously protect against all four viruses and is critical for understanding factors that contribute to pathogenesis.

We report a comparative, high-resolution crystallographic analysis of an ‘‘A-strand’’ murine monoclonal antibody, Mab 4E11, in complex with its target domain 3 of the envelope glycoprotein E from the four DENV serotypes. Mab 4E11 is capable of neutralizing all four serotypes, and our study reveals the determinants of this cross-reactivity. The structures also highlight the mechanism by which A-strand Mabs disrupt the architecture of the mature virion, inducing premature fusion loop exposure and concomitant particle inactivation. 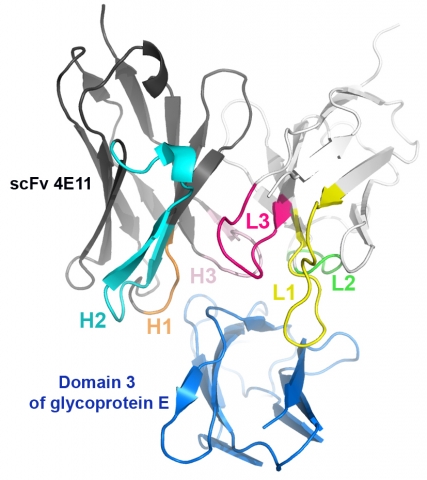 Previews: ’Capturing a Virus while it Catches its Breath’ by Theodore C. Pierson and Richard J. Kuhn.