The structural data reported for a genuine cell-cell fusion protein unambiguously demonstrate an evolutionary link with viral fusion proteins. They constitute a further illustration of the extensive genetic exchanges between viruses and cells throughout evolution and of the striking adaptation of a protein to maintain the same function while adopting an altered mode of action. These data now open the way to a full mechanistic characterization of membrane fusion induced by FF proteins. Our results thus raise a number of new questions, such as the o ganization of the TM segments in the postfusion trimer, the structure of the prefusion form and its organization on membranes, and how the proposed trans-trimerization fusogenic process is triggered.

Finally, these findings provide additional elements that can help in identifying an as yet elusive sequence signature for the class II protein fold and will therefore stimulate the use of structural homology searches to discover unidentified fusion protein homologs in other eukaryotic organisms, for instance, in mammals. 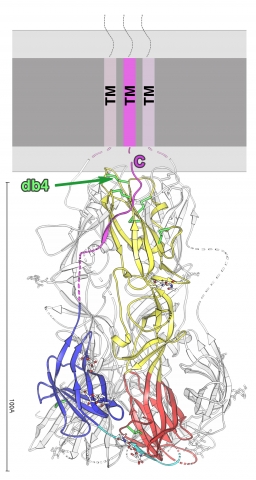 Structure of the EFF-1 trimer protein.

Ribbon diagram of a subunit of the EFF-1 trimer, colored according to the class II convention:red, yellow, and blue for domains I, II, and III, respectively.The green arrow points to the conserved class II protein disulfide bond.

This work was funded by the French ‘‘Agence Nationale pour la Recherche’’ grant ANR-2010-BLAN-1211 01 and by Institut Pasteur, CNRS, and Merck-Serono.