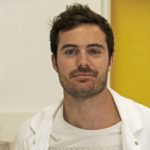 Hydrophobins are amphiphilic proteins secreted by filamentous fungi in a soluble form, which can self-assemble at hydrophilic/hydrophobic or water/air interfaces to form amphiphilic layers that have multiple biological roles. We have investigated the conformational changes that occur upon self-assembly of six hydrophobins that form functional amyloid fibrils with a rodlet morphology. These hydrophobins are present in the cell wall of spores from different fungal species. From available structures and NMR chemical shifts, we established the secondary structures of the monomeric forms of these proteins and monitored their conformational changes upon amyloid rodlet formation or thermal transitions using synchrotron radiation circular dichroism and Fourier-transform infrared spectroscopy (FT-IR). Thermal transitions were followed by synchrotron radiation circular dichroism in quartz cells that allowed for microbubbles and hence water/air interfaces to form and showed irreversible conformations that differed from the rodlet state for most of the proteins. In contrast, thermal transitions on hermetic calcium fluoride cells showed reversible conformational changes. Heating hydrophobin solutions with a water/air interface on a silicon crystal surface in FT-IR experiments resulted in a gain in β-sheet content typical of amyloid fibrils for all except one protein. Rodlet formation was further confirmed by electron microscopy. FT-IR spectra of pre-formed hydrophobin rodlet preparations also showed a gain in β-sheet characteristic of the amyloid cross-β structure. Our results indicate that hydrophobins are capable of significant conformational plasticity and the nature of the assemblies formed by these surface-active proteins is highly dependent on the interface at which self-assembly takes place.