From an applied perspective, we have shown in collaboration with the team of C. Leclerc, (Immune Regulation and Vaccinology, Institut Pasteur) that CyaA can be engineered to serve as a potent non-replicating vector to deliver antigens into antigen presenting cells and induce specific cell-mediated immune responses (Saron et al., 1997; Fayolle et al., 1999; Guermonprez et al. 2000). Antigens of interest can be genetically inserted into the catalytic domain of a detoxified recombinant CyaA that can be efficiently targeted in vivo to dendritic cells (DC) that express the toxin receptor, the αMβ2  (CD11b/CD18) integrin (Guermonprez et al. 2001). In these professional antigen-presenting cells, the grafted antigens can be processed and presented to both MHC-class I and class II pathways to induce specific CD8+ and CD4+ T cell responses (figure 3). The immuno-therapeutic potential of this vector has been well demonstrated in various animal models. Two therapeutic vaccine candidates against melanoma are currently evaluated in clinical trials. The first one (developed within the European program THERAVAC) targets human melanoma while the second one, developed in collaboration with Genticel (http://www.genticel.com/) is focused on the immunotherapy of human papilloma virus associated tumors (Dadaglio et al., 2003; Preville et al., 2005). 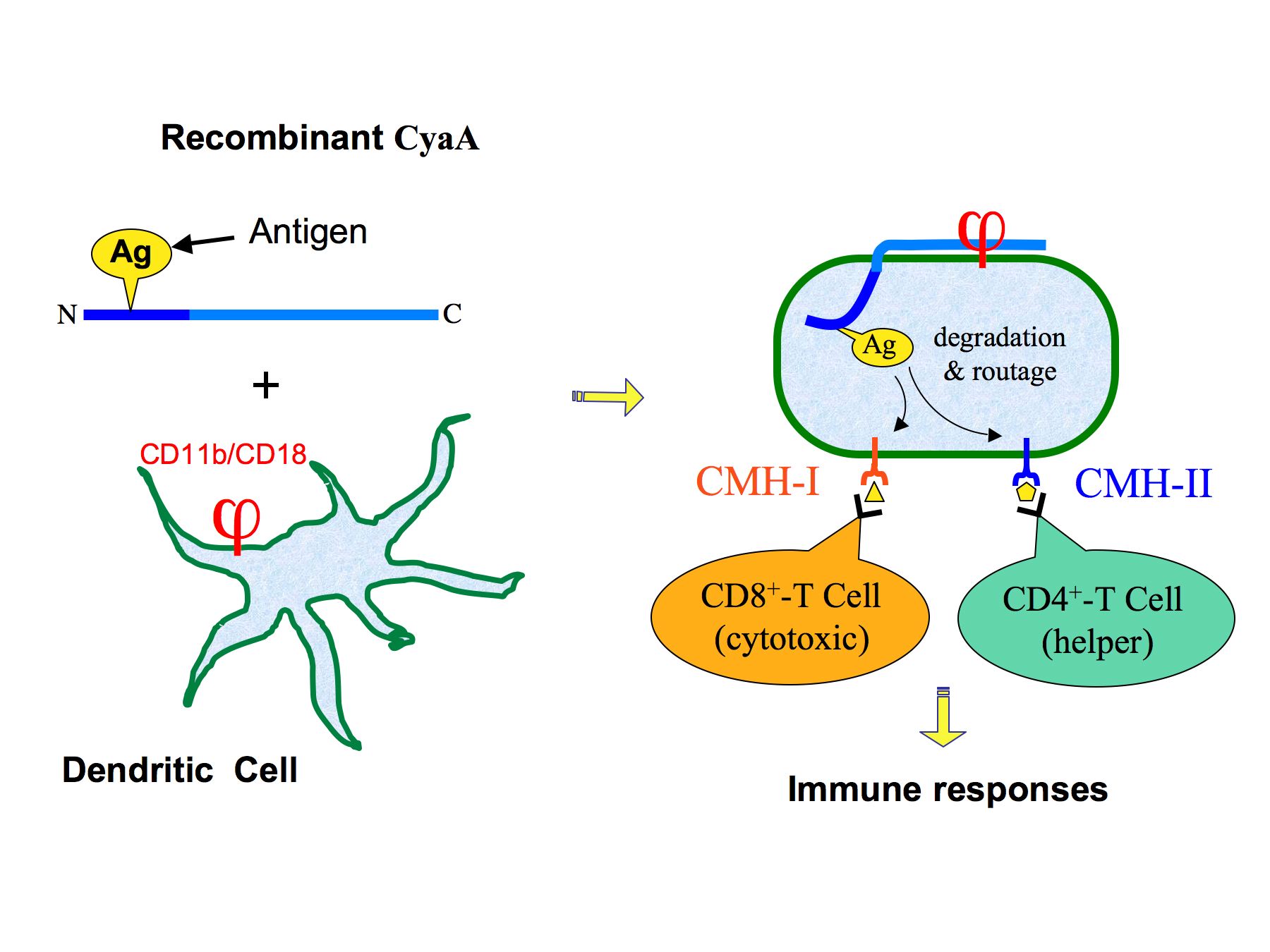 Recombinant CyaA carrying an antigen (Ag) genetically inserted into the catalytic domain, binds to antigen-presenting cells (dendritic cells) as a result of its selective interaction with the aMb2 integrin receptor (j). After translocation across the plasma membrane of the APC, the catalytic domain and the grafted antigen are degraded by the proteasome into peptides that can reach the classical cytosolic MHC class I presentation pathway, to elicit specific cytotoxic T-cell responses. Alternatively, the recombinant CyaA can be endocytosed into. endosomes/lysosomes where the protein is proteolyzed. The released peptides, can enter the MHC class II presentation pathway, to elicit specific Th1 type CD4+ helper T-cell responses.