A thousand fold improvement of an antiviral activity

The starting point of this project was the modest activity displayed by compounds 1 and 2, on the phenotypic Measles-based antiviral assay designed by Pierre-Olivier Vidalain (1) and run on the CBC platform managed by Hélène Munier-Lehmann. What was also interesting in the results of this screening was the lesser effect of the N-pyridyl derivative 3 lacking the 5-methyl group whereas the 5-trifluoromethyl-bearing analogue 4 was slightly more active. In other words, with the few analogues evaluated, which we had prepared in the course of our project focusing on the synthesis of new chemical entities, we already had elements of structure-activity relationship with some contrast (the worst that can happen in MedChem is a flat SAR). 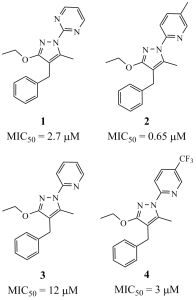 One of the obvious compounds to prepare and evaluate at that stage was the N-pyrimidyl analogue 5 featuring a methyl on its position 5. Remarkably, a 100-fold improvement was observed for this analogue, and an even stronger antiviral effect was seen for the 5-ethyl derivative 6. 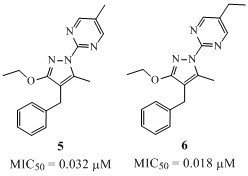 From these results, with the unwavering support of Pierre-Olivier Vidalain and Frédéric Tangy, we did quite a few iterations of design, synthesis, and evaluation of chemically related compounds and many results were reported recently (2,3). In the course of making more than 200 analogues, three objectives were sought. First of all, improve even further the antiviral effect by exploring the chemical space around this series of compounds. Second, find out their mechanism of antiviral action. Third, improve the metabolic stability in vivo, in view of the appalling microsomal stability of the first inhibitors assessed. Concerning the mechanism of action, precedent in the literature describing antiviral compounds quickly oriented us toward inhibitors of the host cell nucleosides biosynthesis (4,5). It thus turned out that the host cell dihydroorotate dehydrogenase (DHODH) is the target of our series of inhibitors. This led us to review the research field (6) which has some importance since teriflunomide (7), an inhibitor of human DHODH, is used in human medicine to alleviate autoimmune diseases such as multiple sclerosis and rheumatoid arthritis. This fact has led to renewed interest in this biochemical target and at least three pharmaceutical companies are developing original series of DHODH inhibitors such as compounds 8–12. In view of the recurrent carboxylic acid residue in the structure of these inhibitors, we thought that this provided our series (which does not require such function) with the possible advantage of a drastically different pharmacology in vivo. 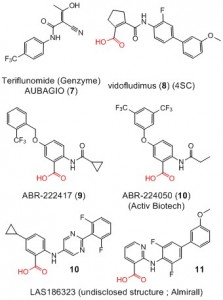 To make a three-year long story short (2,3), the combined selection factors of a good antiviral effect on the Measles virus assay along with an acceptable metabolic stability have, so far, greatly limited their possible evaluation on in vivo models of an autoimmune disease. As illustrated below, for compounds 11-16, the strongest antivirals were amongst the least stable on the microsomal stability assay. Rescaffolding strategies are currently considered to improve the current limits of these series. 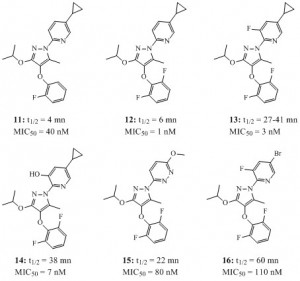 Also of great interest were reports (7-11) describing series inhibitors of Plasmodium falciparum DHODH with an effect in vivo on a model of malaria. Of even more interest was that a degree of cross inhibition with the human DHODH was sometime observed for some example of a given series of inhibitors (12-15). For this reason, Nicolas Malmquist undertook the evaluation of the effect of all our compounds on the growth of P. falciparum parasite. It turned out that only two compounds displayed a modest effect on this assay and a collaboration with Prof. Margaret Phillips, from the University of Texas Southwestern, allowed to assess their eventual effect on recombinant P. falciparum DHODH (3). However, these two compounds are not inhibitors of P. falciparum DHODH, their (modest) effect on the growth of the parasite is thus due to another mechanism (3).

And the story continues! As, out a super collaboration with Susanne Müller-Knapp from the Goethe University  of Frankfort, a cocrystal structure of compound 13 with DHODH as just been deposited in the protein data Bank (code 6SYP).

In conclusion, this work which is still ongoing, started with a compound active on an antiviral assay and led us to the discovery of a series of compounds with a potential use against autoimmune disease…

In other words, is it really possible to plan any specific discovery in MedChem (not to mention milestones and deliveries)?