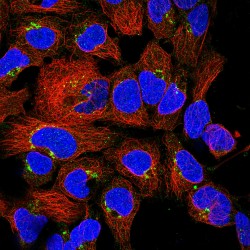 Chiara Zurzolo, MD PhD, is head of the Membrane Trafficking and Pathogenesis Unit and head of the Department of Cell Biology and Infection.

In 1995, started her lab as professor of Cell Biology at Naples University Federico II, where she graduated, focusing on protein trafficking and specifically on the mechanisms of apical sorting of GPI-proteins (GPI-AP) in polarized epithelia. In 2003 she moved to the Pasteur Institute where she pioniered studies on the role of protein trafficking in prion diseases. She has made seminal discoveries in both protein trafficking and neurodegeneration. Her group has shown that the mechanism of sorting of GPI-APs (cholesterol dependent oligomerization) in the Golgi of polarized cells controls the protein function at the apical plasma membrane (2008, 2014). They uncovered the intracellular site of prion conversion and showed that prion dissemination occurs by Tunneling Nanotubes, a new mechanisms of direct intercellular communication (2009). She proposes that TNTs are involved in the spreading of different amylodogenic proteins in the brain (2013) and therefore represent a suitable target to halt incurable neurodegenerative diseases. 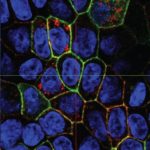 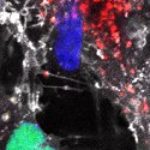 Prion-like proteins spreading in neurodegenerative diseases (NDs): role of Tunneling Nanotubes (TNTs) NDs are protein conformational disorders linked to the propagation of protein misfolding in the brain in a prion-like manner. A seminal discovery […]

Role of TNTs in tumor networking, heterogeneity, and resistance to therapy.

Role of TNTs in tumor networking, heterogeneity, and resistance to therapy. In cancers such as glioblastoma (GMB) and neuroblastoma (NB), intra-tumoral heterogeneity plays a major role in tumor proliferation, trans-differentiation and invasion, as well […]

Unraveling the structure/function of TNTs in vitro and in vivo.

Unraveling the structure/function of TNTs in vitro and in vivo. While TNTs may be involved in cell-to-cell communication in many physiological processes as well as diseases, their physiological relevance is unclear as their existence […]